Home
You are in:  Home » Research » Vital Geographies

Last Thursday the Geographies of Knowledge research group hosted their first annual lecture, where they welcomed Professor Esther Turnhout, Professor in Forest and Nature Conservation Policy at Wageningen University. In her talk, Esther explored a number of sites where biodiversity expertise is produced. These included examples in the Netherlands and drew on her experiences as an expert and lead author for the Intergovernmental Platform for Biodiversity and Ecosystem Services (IPBES). In exploring the transition from ‘biological diversity’ to ‘biodiversity’, Esther’s lecture presented a theoretical frame for replacing the ‘logical’, drawing upon the performative aspects of the production knowledges pertaining to the concept and politicisation of biodiversity. There was a particular focus on three interrelated logics that are prominent in biodiversity expertise: a logic of inclusiveness, a logic of relevance for policy, and a logic of efficiency for assessment. Esther’s argument was that these logics together prioritise model projections over other forms of expertise. The lecture concluded by discussing the scope for doing things differently and breaking through dominant logics: establishing a context for reconceptualising biodiversity expertise in the presence of political logics and alternative modes of knowledge production. 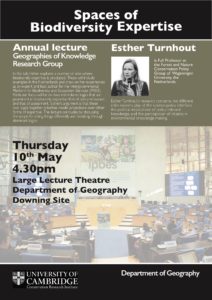 | This entry was posted on Tuesday, May 15th, 2018 at 8:10 pm and is filed under Seminars and events. You can follow any responses to this entry through the RSS 2.0 feed. Both comments and pings are currently closed.